Reflections of the Holocaust 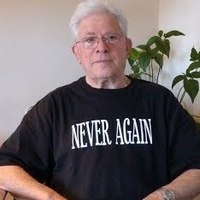 In 1944, 13-year-old Stephen (“Pista”) Nasser was deported to Auschwitz. Of the 21 members in his family of Hungarian Jews, he was to be the only survivor. Among those who died was his older brother, Andris, who in his last moments begged Stephen to let the world know what the Nazis had done to his family. While in the camps (after Auschwitz, he was sent to Muhldorf, a subcamp of Dachau), Stephen kept a diary, and this would serve as the basis for a memoir, My Brother’s Voice, and a play, Not Yet, Pista.

At more than 1000 schools, universities, churches, and other venues, Stephen Nasser, who now lives in Nevada, has spoken to audiences about the Holocaust and its lessons. His work in Holocaust education has won him awards, plus grateful letters from thousands of people who have heard him speak.

After his talk at OSU, copies of My Brother’s Voice will be available for purchase, and Mr. Nasser will do a book-signing.

Note: In order to assure that everyone who attends this event will find seating, we ask that those who wish to attend obtain tickets.